Recently, when I was badly, and with impeccably awful timing, losing my voice, I bumped into Alan Bissett on a train journey from Inverness to Edinburgh. Now, since Alan's latest work is called The Moira Monologues, which he has been touring in Scotland to great acclaim and with sell-out shows, I should have been able to rest my voice. Surely, Alan, chatty man that he is, would do all the talking? But oh, no, no: this is me we're talking about. I don't stop talking just because I have a sore throat, events coming up and an acclaimed comedian sitting opposite me. Even with his very lovely girlfriend there.

So, we got talking. Or he did when he could. And I discovered that the Moira Monologues is (are?) now an enhanced ebook thingummy, which I was very interested in, mainly because I didn't actually know what it was, except vaguely. Basically, it's an ebook, enhanced by extra stuff, in this case by the full audio version of the Monologues, which people can then download onto other platforms. Also, you can buy the print version of the book as Print on Demand. So, multi-purpose, multi-platform. Anyway, I thought I'd get Alan to tell you a bit more, including a bit more about Cargo, his innovative young publishers. (Who, by the way, sent me a press pack so digitally sophisticated that I couldn't open it. But they were so enthusiastic that it almost made up for it.)


In which I interview the man behind the Moira Monologues.
NM: What the hell is this project?? Spill the beans, Bissett.


AB: The Moira Monologues is a 'one-woman show' which I wrote, performed and toured throughout Scotland last year, including 3 weeks at the Edinburgh Fringe.  It's a story based on the women in my family, who are brilliant talkers, which, for some reason, I thought it would be a great idea to perform myself...as a woman!  The reviews and audience responses were through the roof, and the BBC have even bought the character for development, so I figured publishing the script plus audio version would be the next logical step.

NM: What's the thinking behind the enhanced ebook + POD platforms?


AB: First of all, I wanted to support Cargo, who are a new Glasgow publisher, run by people in their early twenties, who have tons of ambition and energy, [NM: indeedy]and I thought this project would suit them.  They have very innovative ideas for how to publish and promote work that don't just include the usual book chains/broadsheet reviews route.  The idea of publishing the Moira text PLUS an audio of me performing the show live for downloading to iPods, iPhones and laptops is a very new and exciting one.  It retools fiction for a generation who are far more au fait with technology than I could ever be.  AND for people who like a good old fashioned book, they'll also print you one on demand! [NM: btw, I note it's not available for Kindle. Haha Amazon. EDITED TO ADD: oops, wrong info. It is available on Kindle. Sorry, Amazon.]

NM: What are you doing to promote it?


AB: What I always do: touring myself round the schools, reading groups, libraries.  I probably do about 3 readings per week, sometimes more, and now I almost always get requests for Moira.  She's a popular woman!

NM: Tell us about @moira_bell on Twitter. Do you find that works in a way that your own persona wouldn't? I know a couple of people who have alter egos as Twitter characters but I remained to be convinced.


AB: Yes, I'm having fun with it.  I like being Moira anyway - because she says things that I wouldn't DARE - and given I'll have to write more of her for the BBC it allows me to explore her world a bit more.  For people who saw the show, and now feel like they know her...well now they get to have her as their Twitter pal! [NM: I follow @moira_bell - highly recommended.]

NM: Tell us a bit of other book news - what does Alan Bissett do when he's not pretending to be a woman? 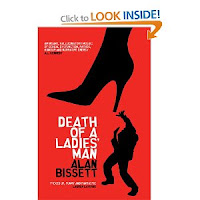 AB: My first novel, Boyracers, is being re-released in April for its 10th Anniversary, with a new afterword by me, and my new novel, Pack Men, will be out in August.  STV have just bought my most recent novel, Death of a Ladies Man, also.  So it's a very exciting year.  Moira, however, is queen, and you should check her out.  She's kinda unforgettable.

Big thanks to Alan for giving up his time. If you want to download Moira, or order the book, the link is here.


I think this is all really interesting, giving us some ideas as to what ebooks can do.  Enhanced ebooks are, I believe, a really good way forward. I lied when I said I didn't know what they are. I actually have my own dream of the future: a paper book just like a "normal" book, but enhanced by a sheet of electronic paper at the beginning, so that you can access extra e-bits and online stuff by touching something on the e-paper. So, better than an enhanced ebook - an enhanced booky book.

On that subject....
I have actually read (and paid for) an enhanced ebook - and I'm afraid I give it only 5/10. It's called Net Matters, published as an app for iPad only by Canongate Books. It seemed to me just an excuse for producing a disappointingly short book, with pictures, some of which move without reader control and which in one case completely prevented me from being able to read the text. You can't find your way around; it's nigh-on impossible to find a bit you want to read again; and it's more like a long essay divided into chunks, with pretty (but sometimes distracting) pictures and a few links to websites. So, enhanced ebooks are the way forward but this was not a good introduction, in my opinion. Canongate is a very clever and often brilliant publisher: I believe they could have done much better.
Posted by Nicola Morgan at 07:38

Ooh Moira sounds fun.
Not sure about the e-book thingummy though - my technologically savvy brother has explained there are problems and you seem to have found some more. Fortunately I am not likely to have an e-reader given to me!
Nevertheless they also appear to have uses in some circumstances. Do you see it taking over most of your reading one day?

Thanks for the publicity, Nicola! Just to let folks know that The Moira Monologues is now also available through Amazon for Kindle. - Alan

My friend is going to work for the VSO and has bought herself a kindle rather than have to carry books with her, so in those situations I can see the point of an e-book. I'm still not so sure I'm convinced about using them in my everyday life. Agent and authour, Alan Guthrie, has a really interesting blog on the rise of e-books which I recommend.
http://ebooks-that-sell.blogspot.com/
With regards to Moira, I have already recommended this to my friend for her kindle. I've seen it performed twice now and it is brilliant! I'm a big fan of Alan Bissett's writing in general, and am pleased to see him featured on your blog, Nicola.

MOIRA is sheer brillant and not to be missed, seen it 4 or 5 times now and still roar with laughter and have already got my ticket to see it at at FALKIRK TOWN HALL on 15th April, have also down loaded it to my kindle.

I like your idea of a normal book with a sheet of electronic paper at the front. It sounds like the best of both worlds to me.

I saw Alan perform Moira down in Ayr last year and I can second everything you say, NM - it is brilliant and hilarious