THE NATIONAL MUSEUM OF SCOTLAND AND ALL OUR STORIES 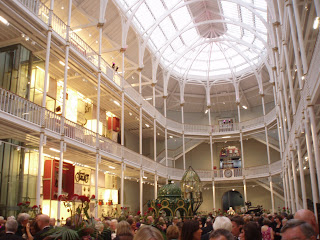 This is not about books, but it is about stories. Last week I was lucky enough to be invited to the gala opening dinner for the gloriously renovated National Museum of Scotland. My husband and I have a small connection to this enormous, ambitious project and to see the reality of the plans and pictures that we've been looking at for so long was breathtakingly wonderful.

None of my pictures will do it justice but that's ok: you will just have to come and see it yourselves! By the way, those who have been to the NMS in the past will recognise this as the revamped main hall. But this is no longer the entrance hall. The entrance hall is awesome in a very different way and I don't have a pic of it, I'm afraid. I blame the fact that I had a glass of champagne in my hand at the time and didn't want to put it down. 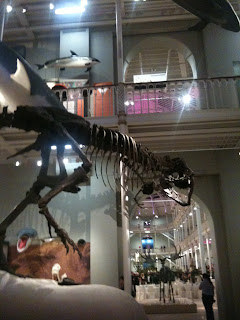 So, what about the stories? The National Museum of Scotland is about stories - the stories of our lives, all of our lives. All museums are, but this is an epic of, well, epic proportions. See, already I am running out of words. In no other city can you find everything under one roof: animals, insects, birds, science, geology, arts, fashions, furniture, jewels, machinery, revolutions - industrial and martial - materials and objects from every culture, every age. And beauty, just so much beauty.

My family has its own personal stories of the Museum. It's where Edinburgh parents - and anyone who could get to or found themselves in Edinburgh as tourists - spent wet weekends with their children. It was (is) free, glorious, full of ancientness, central, endless and had vast shallow staircases to slide down. Oh, and much opportunity to get lost. The animal rooms were our favourite. So much better than the 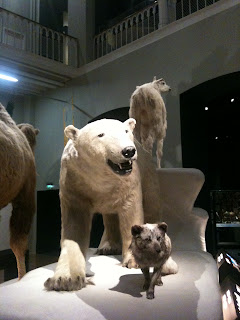 zoo because all the animals were always there, never hiding. (Though what we never knew was that 80% of the Museum collections had never been shown - and that's one of the main things this new project has rectified.) There was the vast blue whale suspended above our heads, and the elephants almost within tickling distance. There were dusty rows of insects - in a room which I preserve in Deathwatch, where I have a scene in the insect and arthropod gallery, a room that you will never now see. (Buy the book!)

It was in the animal rooms one day that my two children, perhaps aged five and seven, danced and sang the Stranglers' lyrics, "No more heroes any more." We are not quite sure why they did this (unless we were in the extinct animals room at the time) but it led to another story of its own. About twelve years later, my husband and I met Hugh Cornwell, formerly of the Stranglers, and were having a drink with him when I happened to mention our daughters' rendition of No More Heroes. He was somewhat bemused by this idea, unsurprisingly, and, to cut a long story short, the next night all four of us met Hugh C for a drink, so he could meet the girls who'd sung his lyrics beneath the blue whale of the Museum. 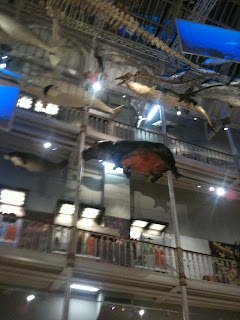 Last night, as my husband and I were getting ready - which took some time as this was what I call an Event of Extreme Frockness - one daughter, now twenty-two, expressed some mild envy that we were going to the dinner. She'd heard about the renovations in the news - this has inspired huge press interest and has made a big splash in the UK media - and she wants to go and see it as soon as possible. She thinks it sounds exciting and special. This is a young adult, the age you don't expect to be interested in museums. But people of all sorts, all backgrounds, all walks of life, are genuinely inspired by this huge new project. Ours, yours, full of all our stories.

On budget, on time, as the organisers have kept saying to us throughout. Unlike a couple of other notable Edinburgh building projects that I won't mention. 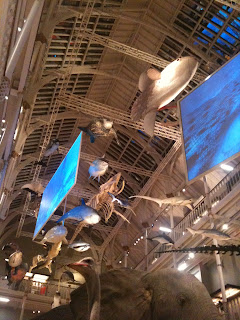 There is only one controversial aspect of the whole project. Please brace yourself. You will be shocked.


The goldfish have gone.
What? No more bacteriaful water for children to trail their chocolately fingers in? No more gazing at the money lying temptingly amongst the glutinous goldfish excrement? No more nauseating smell of something not unlike a stagnant rock pool?

Come visit the National Museum of Scotland in all its glory. It has stories to tell you.
Posted by Nicola Morgan at 07:04

Great Hugh Cornwell story! Would have liked to see that frock (and the shoes) you wore the other night . . .
The look of the NMS reminds me of the Kelvingrove, which we visit whenever we go to Glasgow.

It is MY history too and I am absolutely grrrrreen with envy. It was an amazing place when I first saw it and it must be absolutely marvellous now.

It looks lovely. I worked there when all the talk of renovation began, so I'm really looking forward to visiting while I'm in Edinburgh in a few weeks! Yay, NMS!

Glad you had such a great time, in a great place. One day I'll make it to Edinburgh again . . .

Nicola, thanks so much for posting this, especially the pictures - it looks fabulous. My late brother worked there, my son made a film there, and I also have a sort of professional interest so I must get myself up there as soon as I can to see it all!

I hope you will all get to see it!

Another good reason to re-visit Edinburgh (as if I needed one). This sounds a fascinating place and the first photo alone would have sold it to me. Love the goldfish descriptions! Jane Gray

I went to the opening on Friday - along with 6000 others. The genuine excitement and anticipation that people were showing moved me to tears - and that's a weird thing to feel at 10am without a glass of champagne. I met a neighbour of mine there, a partially dreadlocked, very cool 15 year old, who had got out of her bed at 8.30 in the holidays to be one of the first to see the revamp. How many other places could inspire that?

Coming down in October (staying at the Witchery - what decadence!) and really looking forward to seeing the museum in all its revamped glory :)

I sonds amazing Nicola. if I ever get to Edinburgh I'll definitely be visiting.

Scotland is one five countries I haven't yet visited in Europe, but it is on the TOP of my list!

I long to visit and hope to get there soon and I can't wait to see this gorgeous place in person.

The museum was the other babysitter for my mum. We spent hours and hours in there, mostly getting lost in the little backrooms, trying to find displays we'd not seen before. The space section was my favourite. Mum would tell us what time to come back to the main hall and we'd meet by the fish. No idea what she did in the meantime but as a single mum of three, I suspect she just went off to a quiet corner somewhere with her book for a rare chunk of piece and quiet! The museum also ran children's workshops in the holidays - we did all sorts of exciting projects, including making our own box brownie cameras and taking a picture of the glass ceiling in the main hall with them. Another time, we helped to paint designs onto an enormous wigwam that was then erected in the main hall. One Easter, we were taught how to blow the insides out of an egg and then we decorated them in the style of Russian faberge eggs. So many good memories. Can't wait to take my two sons there in a month - they were both born after it closed for the refurbishment so they've never seen the main hall.