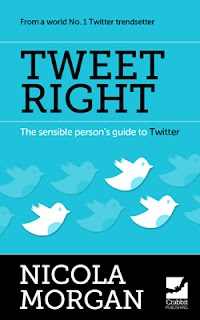 Last Tuesday I announced that I would announce the publication date of Tweet Right - The Sensible Person's Guide to Twitter very soon. (I couldn't say when, because I didn't know when it would actually be up there on Amazon.) When I realised that it was up there, looking good, it became the worst secret in the world over the weekend, when people discovered that it was available. I asked them how and it turned out that already if you went on Amazon and search for books to help with Twitter, Tweet Right was coming up. It was No 22 in general non-fiction books, and that was before I'd told anyone it was there!

Anyway, I reckon that at £2.74 (on Kindle) it's a bargain for people who want to know how to navigate Twitter and retain their sanity. The price for other devices will vary a little depending on where you buy it. (It will be available soon in ibookstore and elsewhere, for all devices. Currently Kindle only.)


Remember that you do NOT need a Kindle to read a Kindle book. Just download the free software from Amazon and you can read it on your computer, phone or ipad.
I have three things for you to celebrate publication and to thank you for your patience.


THING NUMBER ONE
#TweetRightComp - with 1st prize of a signed copy of any of my books plus a crabbit bag, and three runner-up prizes of crabbit bags, this competition starts NOW and ends Tuesday Aug 23rd at midday (UK time) with the winners being announced during the party that evening. (See below.)


Your task, should you choose to accept, is this:
In a single tweet (with no cheating by using twitlonger - grrr) and including the hashtag #TweetRightComp, sum up your feelings about or impressions of Twitter. Or how would you describe it to someone who has never tried it?

Enter as many times as you like, as long as your entry is different each time (and different by more than a word or two). I say this only because you'll bore the pants off us if you keep repeating the same point.

Valid entries will be put through Random Generator, to find winners.


THING NUMBER TWO
#TwitterAngels - not heard of them? That's because we've just invented them. Becky had the idea of matching newbies up with someone who would "buddy" them during their first steps on Twitter, and I chhose the #TwitterAngels name.

And? And here's what to do. If you are already on Twitter and know your way around, add your name to a comment below, saying you'd like to BE a TwitterAngel. If you would like to use a TwitterAngel, add a comment saying you'd like to HAVE a TwitterAngel. Then, match up with each other! It's up to you. When possible, Angels should try to use the #TwitterAngels hashtag on Twitter, just so that more people hear about it. Later on, if people want an explanation of #TwitterAngels after this post has drifted off the page, you'll see it on the Tweet Right page at the top of the blog. There's no time limit to this scheme.


THING NUMBER THREE
#TweetRightParty
You are all invited! Next Tuesday, Aug 23rd, on Twitter, 6.30pm (UK time) till late. By that time, you will have read Tweet Right - :)) - so you'll know how to use hashtags and how to create the #TweetRightParty column so you can have fun with everyone else even if you don't already follow them. (The party will be a great way to find new people to follow and follow you.) Lots of my Twitter friends will be there to help you. And I'll announce the #TweetrightComp winners.

And, if you don't know what to do, ask your TwitterAngel :)

Do please buy the book. And if you know anyone thinking about joining Twitter or who has tried but not got into it, or who wonders why anyone should bother, do send them towards the book. It has already had a terrific response, with even seasoned Tweeters saying they've learnt things.

Tweet right - there's no other way.
Posted by Nicola Morgan at 07:01

I am not purromising I know all the answers but I will put a paw up and try to be a TwitterAngel Purrlease remember though - I live in a different time zone. I may not be able to help immediately.

Well, I'll definitely be a #TwitterAngel and do solemnly promise to lead new tweeters astray...no, wait that's not quite right is it? Anyway, new tweeters can say hi to me @rebeccaebrown if they want!

Cat, I reckon having a #TwitterAngel down-under is all part of Nicola's plan for world domination ;-)

And congratulations Nicola! Tweet Right is fabulous - I know, having been one of the mysterious first buyers - and tells everyone what they need to know with humour & sense. My review will be blogged and Amazoned asap!

Am in Venice sans Kindle - supposed to be working! - but will buy TweetRight as soon as I get back.

Not been there long enough to be #TwitterAngel - still making too many mistakes myself. But will definitely be coming to the party. With wine.

I've been looking forward to this book, as I definitely fall into the category of "on Twitter, but don't know what to do with it". Will be purchasing from Amazon very soon. Thanks, Nicola!

I'm trying to be #TwitterAngel to the Teen - which isn't working too well, mainly because she spends all her time chatting on FB! Happy to volunteer if you think I can be of assistance.
Sorry I can't make the party as I'll be beyond broadband and mobile phone signal.

I would absolutely love to have a Twitter Angel! I signed up for Twitter 6 months or so ago (cat_dean) and have been, well, just too scared to do my first tweet! But I *will* read TweetRight and do it this time!

I'm not sure anyone would call me an angel, least of all those who know me on Twitter, but I'm happy to help those who are willing to be led astray...
I'm @MarshallBuckley (and Google is refusing to allow me to comment using my email address...)

I'll be a #Twitter(Rebel)Angel if you like! I've read #TweetRight already and it's FA-BU-LUSS. Congrats Nicola!

Totally happy to be an angel. You can find me on Twitter or via my blog www.clairemarriott.com

Congrats Nicola! Off to buy your book and then tweet about it....

TweetRight--an eminently sensible book at last! Read it last night and can recommend most highly to all you Twitter newbies out there. I'm happy to be one of the Crabbit's #TwitterAngel posse (mwahahaha *evil grin*) at @lucycoats. I suppose I qualify as some sort of twittery expert witness. Possibly a slightly mad one.

Seeing as you have self-published this Twitter book, are you embarking on a self-publishing career or changes to your agenting career?

Do you still see a place for traditional publishing or do you suggest others follow down the self-publishing road?

Would love to know your thoughts on the Kindle experience.

I love Twitter and am more than happy to be a #TwitterAngel.

I will also attempt to remember the date for the twitter chat.

Just to say, I have just this minutes downloaded it onto my PC. (A Kindle will be my 2011 Xmas present to myself)

It took about 10 seconds as I am already registered for Amazon Kindle downloads there--and that took no time either. So if I can do it (two left thumbs and brain like soup) then so can anyone else.

I love Twitter but need the help of this book. It was Nicola who,ages ago, advised me to use Tweetdeck. I don't know how I could keep track without it so am looking for more tips.

I'm not well-versed enough to be a Twitter angel but if anyone wants to follow me. I'm @SallyZig.

Here's hoping it gets to the top of the charts.

Hi Nicola,
Congratulations on your newest book! Are you a relative of Einstein? :) You're a publishing genius! What a brilliant move!

if you seriously think the word angel is applicable to the likes of me I'd be delighted. Feel free to come and say hi, anyone - I'm @agnieszkasshoes - though I'll warn you I spend most of my time talking about food or arguing with @21stCScribe about typefaces - I don't know if that's a good example to set :)

Would love to BE a #TwitterAngel Had so much help from you and others in my forays into twitterverse would be good to have a chance to payback a little.
@mllouisekelly

I certainly don't know all the answers but I'd be happy to be a #TwitterAngel . I tweet as @juxtabook (and as @ibooknet ). However, if she is still available, I would bet @lucycoats would be the best #TwitterAngel ever!

Very much looking forward to reading this book, as soon as it is available in other formats - there is no Kindle app for my machine. The Twitter Book from O'Reilly was very good but didn't answer all my questions. It's perhaps aimed more at a US technophile audience.

Sounds like Tweet Right is going to have the answers I've been looking for. I kicked the tyres of twitter a couple of years ago and gave up, probably too easily. The final straw was a message I received that said simply, 'Going AFK.'

AFK, my arse. But perhaps I'm getting old and grumpy before my time. With your help, Nicola, I will try one more time to cope with the unbearable shortness of tweets.

It would be an honour to be one of your #TwitterAngels

Not good enough to be an Angel or need a helper but you do have the most brilliant ideas, Nicola. And you could probably write about anything and make it a fabulous read. Even what I knew was jumping off the page and keeping my attention. Will tell my friends.

Twitter is a hot topic at the south east branch of The Society of Authors so will direct people here. Buddy scheme sounds great...

I'd love a TwitterAngel, please! Have just joined and am trying to find my way around… I'm @EmmaPass

Brilliant idea, Nicola! I'll happily be a #TwitterAngel for someone, pref in my timezone :)

I'll be a #twitterangel for anyone who needs one, Nicola. @clarekirkp

And would love to be at the #tweetrightparty but will be out until 9.30 - will check in to see if you're still partying then! :D